The Healing Power of Solar Eclipse 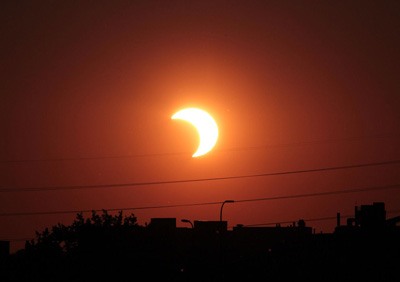 It never ceases to amaze me how the Universe can utilize the planetary movements to assist each soul to learn and to heal so that they can move to a higher vibration on their soul journey on the Earth Plane. The Eclipse is absolutely one of the best and most powerful opportunities. I want to share what happened to me last week leading up to the January 5th partial Solar Eclipse.

As I wrote in my previous newsletter, I have predominantly Capricorn energy in my 2019 Solar Return – Saturn, Pluto, South Node are all in Capricorn and approaching to natal Chiron (the deepest wound) in the 2nd house, the house of self-value and self-worth. The partial Solar Eclipse on January 5th is in Capricorn (15 degree 25 minutes). It has a wide conjunction to my natal Chiron, indicating healing around authority and self-value. Honestly, I could feel something coming to the surface, but had no clue as to what was going to take place. I had similar feelings before and experienced a powerful healing in my own life during January of 2010 and witnessed it again with Margaret in April of 2014 relating to Eclipse energy.

With that said, here is what transpired for me. The energy triggered a healing crisis for me beginning with my brother’s passing on January 2nd my time of the New Year 2019, the 3rd in China. He was diagnosed with cancer 6 months after he retired in 2016. In the beginning he was communicating with me often, but then he suddenly stopped without giving me any explanation. I was deeply hurt because we grew up together and always supported each other. He was the only sibling that I was close to among my five brothers and sisters. However, I did not confront him nor press him as why he stopped communicating with me. For some reason, I was scared of confronting him.

In 2017, when Alan and I went China to teach a Chinese student, we made a special trip of 1,000 miles to my hometown on my birthday with the intention of helping my brother heal his cancer. Unfortunately, he refused to let me to visit him at the hospital, and on top of that, he ordered all my brothers and sisters including his wife to not tell me the hospital address or room number he was in. I was so angry at being treated with rejection by him and the rest of my family. I decided to write an email to confront him. So, while Alan slept, I quietly got up at the midnight, and wrote an email to express my disappointment. I planned to send the email out in the morning because I wanted to re-read it to make sure that I truly expressed myself rather than just throwing my anger at him. Surprisingly, the following morning I was unable to open my computer, it turned out that the hard drive of my computer mysteriously died, along with the email I had written. Consequently, I ended up not seeing him or confronting him with my email to him. The situation brought a huge healing crisis out of me at the time and I was sick for our final two weeks in China and it took a month to completely recover from it. Also, my sister who was assisting him in his plans to insure I didn’t see him also became sick. She ended up being hospitalized for a week and Alan and I moved out of her house after only 1 night and moved to a hotel. It was as if something deep inside her was triggered by being in the presence of Alan and me.

Due to the incident of my brother and siblings thwarting my visit to assist my brother while I was in China, I decided to let go of them, and focus my energy on my own life and on healing my body. I would occasionally receive a message from my brother’s wife about his situation, but not from my brother or any of my siblings. He seemed to get better after two sessions of intensive chemotherapy. However, when the Nodes of the Moon changed signs in November 2018 from Leo and Aquarius to Cancer (North Node) and Capricorn (South Node), the Karmic lessons shifted the focus to home and family, and career, goals and success. The Nodes are located in my natal 2nd and 8th house. Since the South Node in Capricorn is in conjunction to my natal Chiron in the 2nd house, and North Node in Cancer is in conjunction to my natal Uranus and Jupiter in 8th house, I intuitively knew that I was going to go through some deep healing through a healing crisis and the issues would be around death, and it would have to do with my home and family. However, I had no clue how things were going to transpire, at least I did not expect it would happen immediately after the 2019 New Year!

My brother was hospitalized right before the New Year due to severe side effects related to the chemotherapy treatments. Then he soon went into a manic and unconscious state. My sister-in-law informed me about it, and I immediately did a meditation to send healing energy to him. During the meditation, I strongly felt that it was his time to leave the earthly life and go back home to the Spirit world, but I could sense his incredible fear of death and feel him fighting to stay alive. I went to talk to his soul directly in assisting him to understand his situation so that he could let go of his fear of death. The following morning, I did another meditation and talked to him again. This time, I asked his forgiveness if anything I did hurt him, and I also told him that I forgave him, and that I only had love for him, and that I did not hold any grudge or resentment towards him. I felt him calm down and begin to let go. I also communicated with his wife about his situation. He passed away peacefully that afternoon our time.

During his dying process, I kept communicating with his wife to guide her in assisting his transition. I honestly thought that I had let go of him. Surprisingly though, Margaret gave me message through one of her students in Australia, Rebecca Teraki, who is an amazing channel for Spirit. Her message to me was that I needed to write a letter to each member of my family to express my feelings and release the energy I was subconsciously holding onto to assist me to heal my Chiron wound. She pointed out that my family was in fact assisting me to open my heart. To be honest, I did not understand it because I thought I had already forgiven my brother and had let go of him after the incident in China. However, from my past 15 years working with Spirit, I knew that if it was not serious or important, they would not have given me the message through another channel whom I knew was truly channeling them and I would trust. This happened last Friday evening, one day before the January 5th Partial Solar Eclipse took place.

So, I immediately acted upon their guidance. I started writing the letters to my deceased brother, my sister who helped my brother to prevent me from seeing him, and one of my other sister-in-law’s who was trash talking to me to show her disrespect for me while I was with her briefly in my hometown in 2017. As I started writing to my brother, all the unexpected emotions were brought to the surface, then details of a past life situation was revealed to me – the past life where I was with Margaret, Alan, me, Korinne and Ratna, and my brother, sister and sister in law in my current incarnation. It had to do with an affair I had with Alan in that past life. The servants found out about my affair with Alan, who was my son-in-law in that incarnation and they reported this to my husband. My husband in that life was my deceased brother and the two servants were my sister and sister-in-law in my present life. They were both loyal and close to my husband. My husband felt betrayed and was so angry with me that he ordered the servants to stop me from seeing him and they poisoned me to death. As I was writing, I started crying and crying, and I could feel the deep pain that was trapped inside me slowly being released. After I wrote a letter to each of them, I did a meditation for forgiveness. I felt much better after writing the letters, and then I fell into a deep sleep.

The following morning, I went further to explore my responsibility for that past life. I found out that I was an angry, resentful and vindictive woman. I did a lot of sabotage and hurtful things to Alan and Margaret. Basically, I dug my own grave. I really could not blame anyone or anything for my own misfortune and death. As a result, I ended up writing a letter to myself for self-forgiveness.

It was indeed a mind-boggling healing experience. Unexpected and significant for my own soul evolution. It enabled me to see that the real cause behind my Chiron wound relates to men and authority issues and my responsibility for healing is within me. I cannot heal myself by holding onto a “victim” mentality that constantly has me blaming others rather than being accountable for my own actions. I must go deep within to closely examine what I need to do to be responsible for in my life. I need to learn from the experiences and take full responsibility for my own thoughts, words, choices, decisions, behavior, actions and reactions. Wow, I can’t believe that all this happened right before the Solar Eclipse. It absolutely affirms for me how powerful and enlightening the energy of the Universe is in our soul growth!

I have come to realize that healing takes place not just from saying that we forgive and let go, and not just from the mind, it must come from an open and forgiving heart, and most importantly from letting go and releasing all the repressed energy we have carried from past incarnations. Everything is energy; forgiveness and healing is all about letting go of the old repressed energy we have buried deep in our subconscious. Often, the energy is buried too deep to know consciously, and the planetary movements, especially the eclipses are powerful opportunities that enable us to connect to a deep part of us so that we can be healed and move forward to higher vibration and consciousness. We should never underestimate or take for granted all these opportunities. We need to listen and pay close attention to our relationships, surroundings and hidden messages and signs, these are all the potential healing opportunities the Universe is constantly placing in front of us to assist us to grow! All be well.